Changing Channels: A Ray from the Long Long Ago

Compa just switched to the Twins game, away from the Yankees/Tigers game on ESPN. Since discovering the MLB Network her tolerance of the sycophants on the WWL has hit the negative numbers. Normally we'd go with Yankees game if only b/c the outcome helps/hurts the Rays, but after listing to Sutty and whoever else hit all the pertinent talking points about Jay-Z she flipped her sh!t and changed the channel to the Twins. After that we'll be on the MLB Network watching for Rays highlights, cutting ESPN totally out of the picture. Nice.

Anyway, glad to get that out there.  Here's another card I got from Padrographs, the guy who was the face of the franchise before Longo, CC, or Huff. Jim Morris. Hell, he's one of the only ballplayers to have his own movie, The Rookie. 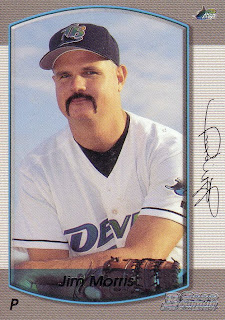 And let's be straight: Dennis Quaid as Jim Morris makes getting to the Majors at 35 years of age pretty difficult. I pick up this card of this guy, the real Jim Morris, and think I was playing against this guy in church-league softball a few years back. That said, what this guy did was awesome, even if his MLB dream only lasted 15 innings over 2 seasons. I mean, he struck out both future HOFers Jim Thome and Frank Thomas. Awesome stuff!
Have a good one everybody and goodnight Pumpsie Green, wherever you are!
Posted by Carl Crawford Cards at 7:14 PM