According to various website Score always maintained he was coming down with a sore arm anyway, so McDougal's liner was irrelevant in terms of the arc of his career. Who knows?

As far as baseball cards are concerned, I had a chance to pick up the '58 Score on the cheap so I took it: 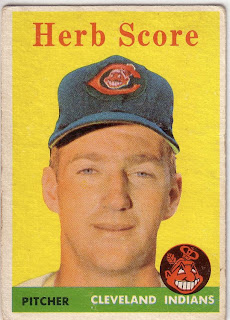 I'm guessing this picture was taken well before the incident with McDougal. Even though Score's left eye looks slightly closed, in the '62 (that I'm on the hunt for!) there's a crescent moon-shaped scar from the line drive. I don't see a scar here. What kills me is the back: 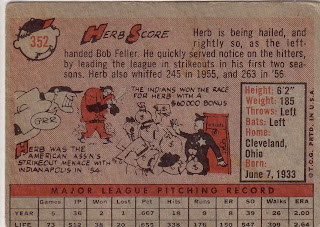 There's all the language about Herb being the "next Bob Feller" but no mention of his horrific, potentially career-altering injury beyond the stats at the bottom: 5 GS (3 of which were CG!), 39 K in 36 IP, a 2.00 ERA. It's a melancholy kinda card, and I imagine the last one where people were planning on enshrining Score with the baseball gods. From the juxtaposition of the stats and the text you kinda know things will never be the same, as they were supposed to be.
I've gone into it a bit on here before, here it is again: I understand the excitement of the Strausburgs and the Chapmans, the Priors and Woods, the Van Poppels and Taylors, but this is well-travelled territory. Life happens to these guys just like it happens to the rest of us. I'm not going to end by railing against the people who are spending THOUSANDS stockpiling the hottest cards of the latest phenoms, but with this: in today's market, how much would a Bowman Chrome auto Refractor #ed to 25 of a pitcher with Score's stats fetch? How much would you pay? How hard would you kick yourself if, only a few years later, that same card was in the discount auto bin at the local shop (hello Mark Prior for $3)? How much harder if, years after that, the same card, like my '58 Score, could be had for .99 plus .99 s/h on ebay?
Have a good one everybody and goodnight Pumpsie Green, wherever you are!
Posted by Carl Crawford Cards at 8:00 AM