First, winner of the "Here Comes Blue Garfoose Giveaway" will be announced Saturday.

When I first started collecting TTM autos a few years ago, for some reason I fixated on getting ttms from the oldest living players. That makes sense, I suppose, and if you follow me on twitter you know I recently scored a major success on that front, landing a ttm from the oldest living MLB player Corado Marrero. I had to go via someone who was traveling to Cuba, and the result was well worth the effort of figuring out a plan and seeing it through. I'll post more about that later.

My focus on the oldest living players led to a second quest, getting autos on the oldest cards I could manage. I realize there IS a 1937 Doerr out there but its non-standard size is kind if a turn off. It also costs even more than the 1938 Heads Up, if you can even find a copy for sale. But anyway, with no further ado..... 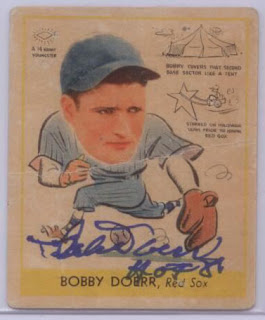 I loved the idea of the 1938 Heads Up cards when I was a kid, though I really couldn't understand the appeal of anything that wasn't Topps, THE official brand among my friends and I. Now that I'm older I think they're amazing for having been conceived of in the 30s, way ahead of their time.

Bobby Doerr is one of the VERY few HOFers who signs ttm, and he even signs for FREE, so I was fairly confident that I could make this happen so long as sticking a 75-year-old Goudey in a plain white envelope with a letter and another pwe SASE didn't give me convulsions. And yes, it nearly did. This was cost-prohibitive for several years but one finally popped up with a reasonable BIN and I went for it. 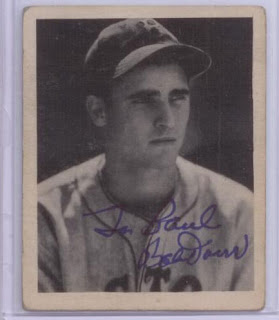 Similar story with this 1939. I had a subject (Doerr), tracked this prohibitively expensive card for awhile, and didn't hesitate when someone underpriced it as a BIN. It was sent about two years prior to the '38, and you can see a difference in the signatures. For a man in his mid-90s, Doerr signs well either way! 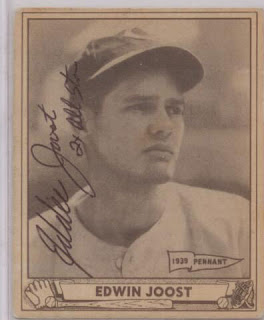 The 1940 Eddie Joost was the first of these I landed. In all honestly, the eureka moment of the entire mini-project came together when I saw someone (I think it was dayf back in 2009) post about this card. My next thought was, "You can still get a handful of pre-war cards signed ttm. Holy...."

Of course, that's aside from the fact that the 1940 design is stunning, particularly with the pennant marking the Reds 1939 team. Overall, an absolute classic. 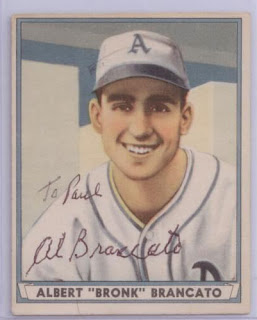 The 1941 edition features Mr. Al "Bronk" Brancato. Straight out of Philly, Brancato started playing for the Mack Men at the ripe old ago of 20. He personalized this and answered my questions.

For comparison's sake, here are the backs, with the '38 looking really small. 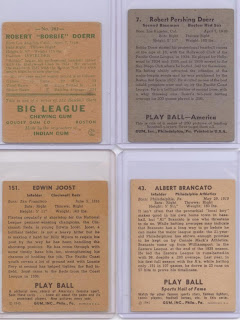 And there you have it! Have a good one everybody and good night Pumpsie Green, wherever you are!