Thanks to everybody who signed up for "Here Comes Blue Contest #1." More are on the way!

From last Saturday until yesterday the Compa and I took a little trip to Port Charlotte, FL for Rays Spring Training. It has always been something we wanted to do, and with Blue on the way we decided it should be done. I had no expectations other than to relax a bit and see a few games, but even still I have to admit: it was absolutely amazing.

We were really fortunate for a number of reasons. First, we had crazy good tickets. Turns out Daddy Dean met a scout in the Rays system who, finding out we're Rays fans planning on going to FL, offered to get us tickets. Free tickets are great no matter what, but these were actual Rays tickets and we sat in the Rays section. That is, most of the folks around us were somehow tied to a player and/or the organization. Player wives, player girlfriends, player parents, player children, you name it. Overall a cool experience I'll come back to over the next few posts, but you make sure to leave any criticism for the drive home. I mean, you have a stake in the game as a fan, but sitting there brought home for me the stakes that these guys' loved ones have in every single play. They're pretty substantial.

I don't have too much to say about the game itself, a 6-2 loss to the hated Red Sox. It's not that I didn't watch (I did), but there were other events going on and, I'll admit, I was a bit fascinated to be up close and personal with the cultural aspects of players' families and loved ones you almost never get to see. This game showed Matt Moore has some work to do (3 ER in 3 and 2/3,) and the Rays bats were maddeningly silent against a ho-hum Sox staff.

The BIG event was that Cal Ripken Jr., owner of the Rays affiliate the Charlotte Stone Crabs, was in attendance and signing his young adult novel. Waiting in line to meet Cal consumed the 3rd to the 7th innings. He wasn't signing anything else, but I had no Jr. cards anyway. Personally, it was cool just to meet a living legend like the great "Iron Man." 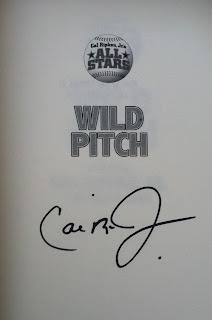 There was also a photo op which, to be honest, isn't my thing. But while I was in line waiting to get the book signed there was a woman holding a Flat Stanley who was asking if anyone would get his/her picture with Ripken and her granddaughter's Flat Stanley. I once took a Flat Stanley all over Europe and Asia for my Aunt and her elementary school class, so I immediately said I would. So, somewhere out there there exists a picture of me, Flat Stanley, and Cal Ripken, Jr., who seemed very cool about the whole thing. I gave her my email so I hope I get a copy!

I also managed to get a few autos before the game, but since it was Rays-Sox on a Sunday there were more people there than you might expect. I don't really like to bug guys in person, but I'll stand there and if they are signing, then great! 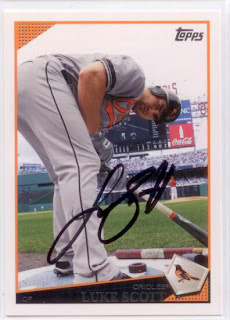 The photo is a Fenway Park classic, and I'd like to think it shows off a lighter side of Scott (better known for a boorish stance on that particular park and some, um, non-mainstream political views), Fenway Park, and the hobby itself. He's not even caught in an awkward moment but rather staring right back at the viewer. Very cool "breaking the fourth wall" stuff.

Then the Tat-Man, Ryan Roberts laid sigs on his 2012 issues for me. First with the D-Backs, 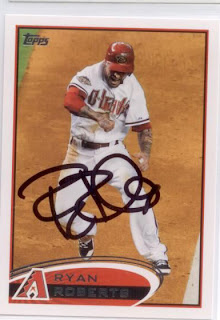 then with the Rays: 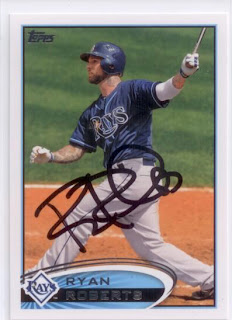 I was actually at his Rays debut in Baltimore last year, and told him that he brought some real energy to the team. Of course, his presence meant my man EJ was closer to leaving town in the long term and Matsui leaving in the near term, but that's what happens. Both of these are cool cards in their own right with the first being a sweet "game winning run" shot and the second perhaps coming from Roberts' first HR as a Ray, which came in Baltimore.

To put bookends around this long post, when we first took our seats in the park, the family seats, I looked over and who should be sitting right across from us but Todd Kalas, the roving reporter during Rays broadcasts. If you are WAY out of your team's territory like I am, announcers like Kalas acquire a larger-than-life quality as they are your media conduit to the team and the life of the park at every game you watch. Appropriately, I dorked out, went over to thank him for his work, and ask him to sign a team card, which he kindly did. 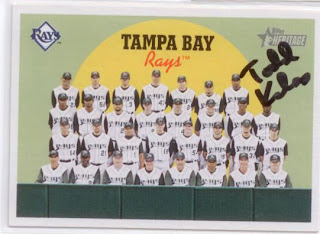 Finally, after a very cool, very full day, as we were leaving the stadium Compa noticed Cal Ripken Jr. signing. Apparently after the books were gone he started signing everything. I had no cards, but there was one thing the Compa and I had brought to Port Charlotte that we thought might merit a signature at some point. So she took it over. 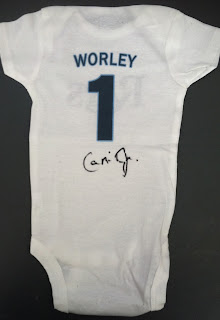 Many thanks to all the folks that made that day so awesome. Have a good one everybody and goodnight Pumpsie Green, wherever you are!


Posted by Carl Crawford Cards at 7:53 AM