(And yes, I'm ambivalent about the title)

I'm ashamed to admit it, but I never appreciated Roger Maris until I moved to ND. I always felt he was a flash in the pan who put together a couple of good seasons but not much else and that he would have never gotten the attention he got if he'd played somewhere other than NY.

The '59 season in KC was good, the '60 season in NY was spectacular, and the '61 (despite the 61 HRs that get all the press) was only a hair better (161 OPS+ in '60, 167 OPS+ in '61). He never approached those highs again and injuries obviously took their toll, but the career itself doesn't get nearly enough credit. Maris was a ballplayer that we'd all appreciate more if he HADN'T played in NY. Mantle should have broken the record, not Maris. He wasn't the anointed one and if he hadn't done it in Mantle's shadow...things would have been different. 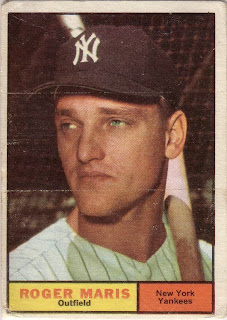 As a card there's a lot to dig here. On the one hand there's the historical coincidence of it being the card issued during the year he hit the '61 HRs. But then we've also got what, objectively speaking, is a sublime baseball card. Maris in the shadow of the batting cage, bat over his shoulder, looking over his right shoulder. We've even got some light that washes out the cages, giving them more depth, and highlighting Maris's face. 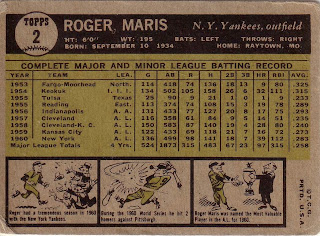 And then on the back we've got a cartoon "Maris" smacking a homer and another of him receiving the MVP trophy. And that was in 1960 on the cusp of the amazing 1961 season. And I love that it includes the first bush-league season in Fargo. Wrap your head around that: 114 games in Fargo! He grew up there so I'm sure he was fine but it only gets above 75 degrees here 3 months out of the year. That's some cold baseball.
Have a good one everybody and goodnight Pumpsie Green, wherever you are!
Posted by Carl Crawford Cards at 8:00 AM