As far as I can tell, the 1950s were a boon for a rare species, catchers who wore glasses. It's been a process, but I'm building a small collection of them. So far as I know, there were whopping three in that decade. I believe there have been a total of TWO since.

One if those guys from the 50s is today's entry, Tim Thompson, aka Charley Thompson. 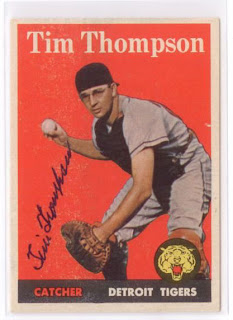 This '58 Topps card belies the fact he only played in 4 games for the Tigers, all in 1958. Still, with those glasses he just daring someone to take a run at the plate.

Thanks for the auto, Mr. Thompson.

And good night Pumpsie Green, wherever you are!