Sid Bream Slides by: TTM from a Brave Great

When researching Sid Bream's career, I was surprised to find out he stole 50 bases over his 12 years in the bigs. The 40 CS by comparison was no surprise at all, save for the fact that the slow-footed Bream attempted a grand total of 90 stolen bases. In sum, I'm not at all sure what to make of that.

Any way you look at it, though, it is kind of odd that Bream will always be best remembered for scoring the winning run in the Braves 1992 NLCS victory over the Pirates. If you were a Braves fan in the late-80s, those NL titles in the early-90s were a glory to behold. And they did it with guys like Bream and another CCC favorite, the man who drove Bream in, Francisco Cabrera. Since I already have a Cabrera auto from 1990, before all of this, I decided it was time to give Bream a shot. He didn't disappoint. 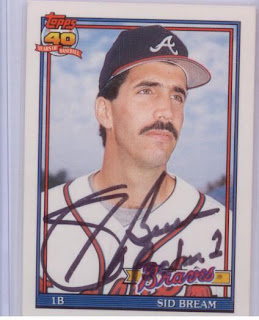 Here's Mr. Bream on his first Braves card. Man, if we all knew then what the next few years had in store. 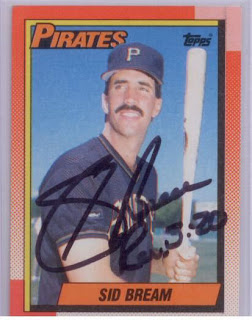 For some reason I think of Bream as being a Dodger more so than a Pirate, but he was a Pirate nonetheless. You wonder if those fans have any regrets?

And here's another look at the Cabrera hit and the Bream slide. You can never get enough of that.