Catching Up: Gomes Winner, and Where I Been 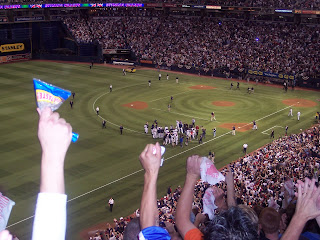 First up, I have a good excuse for slacking the past few days (and I apologize). A friend of mine scored tickets to the Twins game last Tuesday night, and the compa (who is more my partner in crime than voice of reason at times) said that we had to go. So we went. Which meant that I've been playing catch up non-stop since we got back at 3 AM Wednesday morning.
But first, OMG that game was amazing!
Just check out the noise! That stuff never comes through on the tele, and I'm still half-deaf from the screaming. That's the mascot rolling around on an ATV on the field. Mijares (he of the Delmon hpb infamy) eventually took the flag from him (the mascot, not Delmon---don't think they're speaking yet) and led a hand-slapping tour around the outfield. Really, really cool stuff.
One of the strangest things about baseball is that, just because you go to a lot of games and watch a lot of different players in person you don't necessarily see anything special happen. You might see a HOF take the field, and that's awesome, but your memory of a particular game might be of that HOFer making 2 errors and going 0-4. I was really lucky (thanks Jeff and Compa!) that I even had the opportunity just to drive 5 hours, go to the game, then turn around and drive 5 hours home, much less that the game turned out to be so mind-blowingly amazing! The Twins really sent the Metrodome out in style, and it was incredible to be there for game 163 against the Tigers.
So...the moment you've been waiting for...the winner of the Gomes is...after three randomizations...Brian!!! Brian, shoot me an email with your preference for either the Ginter or 206 and I'll get it to you. Thanks to the folks who participated, and spread the good word of Gomes!!!
Have a great one!
Posted by Carl Crawford Cards at 9:54 PM