Don't Mess with the Mule: Mail from John "Mule" Miles

This is the first card I received from the 2007 Ginter Negro League project: 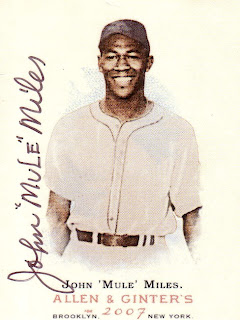 If I can complete the whole thing I'll put them all together in one big post.
There is tons of info out there on Mr. Miles if you Google it, so I'll just link to the search. He's probably most famous for hitting HRs in 11 straight games (eleven!), because of which his manager "Candy" Taylor said Miles "hits like a mules kicks"....and so a legend was born.
He was kind enough to also take the time to fill out the little question sheet I send out, which is always a pretty awesome gesture. Favorite player growing up: Babe Ruth. Toughest Pitcher he had to face: Satchel Paige. Favorite current player: Ryan Howard with the Phillies. If you are like me and semi-desperate for a reason to root for the Phillies against the Yanqis, I think that's sufficient reason right there: the image of an elderly gentleman famous for hitting like a mules kicks pulling for Ryan Howard.
He also included two sheets with further info one his career, which I scanned and have included here. A click and they should go full-sized. 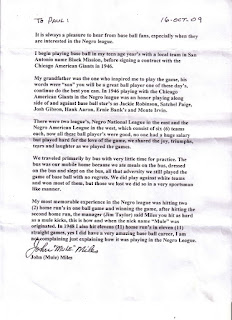 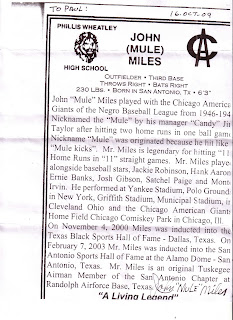 Finally, Mr. Miles said his favorite teammate was Clyde McNeal. I've done some research on Mr. McNeal, but am coming up empty so far. Any advice on where to look would be great appreciated!
A big "thank you" to Mr. Miles, opening up your letter was awesome! Have a great one, everybody and goodnight Pumpsie Green, wherever you are!
Posted by Carl Crawford Cards at 4:48 PM