One of the best recurring stories in baseball concerns the ballplayers who took a break from their careers to fight in WWII, men like two of this site's favorites, Virgil Trucks and Lou Brissie. These men deserve all the praise that goes their way, but until I read Brissie's book I had never thought about the players who fought but DIDN'T resume their careers, men like Cecil Travis. 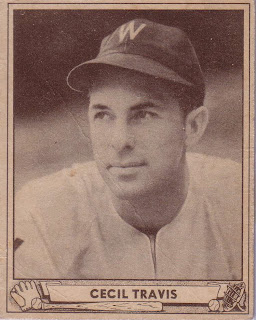 I know, "Who is Cecil Travis?" According to one blog he might be the best player never to receive a single vote for the HOF. Is that hyperbolic? Maybe, but a lot of his contemporaries thought he was a HOFer. Check his stats from '34-'41. His last year before the war, at age 27, Travis posted a monster 150 OPS+ as a shortstop. Bill James projects Travis to have been a HOFer if not for the war, and from age 22-27 Travis's most similar batters are all HOFers.

Post-WWII, however, Travis was never the same. He played only 3 years after returning, retiring in '47.

I wonder what it says about us as a society that we continually celebrate the greats who left and returned without missing a beat and yet seldom acknowledge the sacrifices of those who also served, also sacrificed, and yet because of their demons and/or injuries were never able to achieve in the ways they had before. I mean, in all the much-deserved adulation of Ted Williams and others of that era, I don't recall ever hearing about Travis or many others mentioned in Brissie's book. I have some conflicting thoughts and would love to hear anyone's comments.

At any rate, a book about his life recently came out and I hope to grab a copy soon. After a few months of ebay hunting I finally grabbed the above card (which is great for lots of reasons) for $7.50 with shipping. Like any collector I dig my cards, but this is one I'm really proud to have in my collection as corn ball as that may sound.

Have a good one everybody and good night Pumspie Green, wherever you are!
Posted by Carl Crawford Cards at 5:14 PM