Sometimes You Eat the Bear: Rays from Joe

First, don't forget the group break! Still a few teams left (Angels, A's, Pirates, Reds).
Joe over at Cobb and Hallady responded to my last trade post about some cards. In exchange he was offering a large stack (400+) of Rays. Since what I collect is pretty eclectic I was hesitant at first. What if I cut the cards loose and didn't get a single CC I needed in return? Moreover, what if I didn't get ANY cards I needed of ANY dudes I collected?
Well, since the trade with Ike's Cards had gone so well I though, "Why not?" and accepted the trade. Again, given how nutty things can be in the face-to-face world, the blogosphere does not fail to surprise with coolness.
First up: 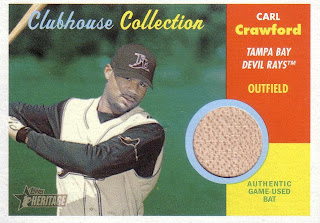 Surprise CC relic that wasn't mentioned in the original trade talk. The best thing about this is that, technically, I already had it. I got a copy through ebay (cheap!) but the card showed up in a pwe looking like it had been used as a prop in the latest production of Stomp. So I was pretty bummed. Getting this card as a "CC to be named later" in a trade like this more than makes up for some anonymous seller's douchebaggy shenanigans.
But, of course, there was a TON more. 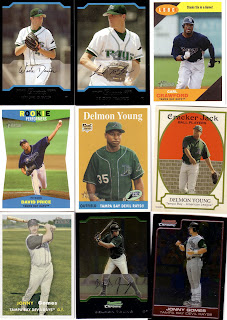 And these are just a few of the literally 400+ awesome Rays I received. From the top left: my first cards of Wade Davis and Jacob Mcgee. Definitely cards I've been after. Another CC Heritage I needed. A Price I needed. Two awesome neo-vintage Delmons. (Did you see that non-highlight almost catch the other day for him at Target Field? Shake that off Delmon. When you get used to the new digs you'll be fine) Then we've got a Heritage Gomes, Chrome Delmon and Chrome Gomes. And that's nine out of a ton. Thanks for the awesome trade Joe!
Have a good one everybody and goodnight Pumpsie Green, wherever you are!
Posted by Carl Crawford Cards at 8:24 AM