I'll start by saying that I recognize Feller signs A LOT, to the extent that folks don't pay too much attention to his autos. TTM or in recent products, if one has the cash Feller autos aren't that rare. 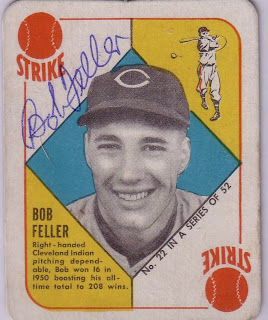 So I decided I'd give it a go with this '51 Topps redback, ttm, for a few reasons. I know Feller signs for cash so I included $10. I'd hate to lose the card, but the risk/reward heavily favored the reward side and $10 is a decent price. What really convinced me is the number of players from the era I've done ttms from who, when asked, stated Feller was the best pitcher they ever faced (the other popular answer: Satchel Paige). With a lot of endorsements I had to give it a go.
Given how small the '51s are I was curious to see, if/when I got the card back, how it would turn out. After a couple of weeks I gotta say I'm stoke with the result. Mr. Feller not only went ballpoint over marker, he also signed in the largest white space on the card. For a guy who signs A LOT and is a HOFer, I think it's great he took the time to have this one come out. Very fan friendly. In turn it inspired me to pick this up: 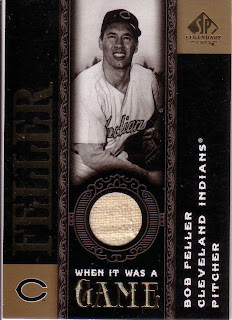 It's a small swatch but still really cool. I knew fabrics in the '50s are a lot different from those used from the '60s till today but didn't appreciate how different until I'd seen this close up. Again, very cool.
Thanks again Mr. Feller! Have a good one everybody and good night Pumpsie Green, wherever you are!
Posted by Carl Crawford Cards at 6:05 PM