Looking at vintage make me feel better about going down 1-2 to the Rangers. OK, not really, but still.

I noticed Eddie Moore at the table of one of the guys selling cards. It was the only thing near that old he had and he seemed relaxed so I asked to take a look. 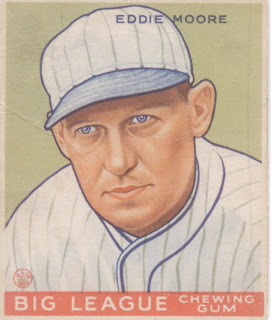 Eddie himself looks a bit wistful. He's at the end of his career and just staring off into the distance, like he knows that when you go from the Browns and Giants to playing with the New Orleans Pelicans the end is pretty much near. That said, as their starting 2B in 1933 Eddie led them to a Southern Association Championship. That and, with those blue eyes, I imagine he was quite the lady killer no matter where he was. 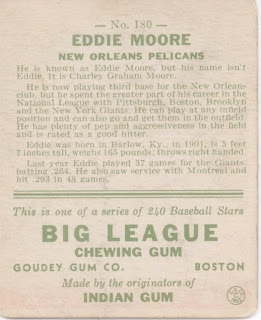 The back of the card is full of Goudey goofiness. His name isn't really "Eddie"? Was that just made up? BBReference lists him as "Edward Charles Moore," while Wikipedia agrees with the Goudey here. (The Wikipedia entry, btw, is pretty nice!) Gotta do more research on that and figure out what the deal is.
Anyway, it turns out Eddie was an insert in UD Goudey a few years ago and was one of the big hits this guy pulled from his case. After some more discussion I put Eddie back down and walked away, because I wasn't there to spend my limited budget on a single but awesome vintage card.
Fast forward to when I'm buying cards at the adjacent table about 1/2 hour later. When I'm finished there the guy simply stands up, hands me the Eddie, and says, "I'll give it to you for $5." I still can't believe that!
Judging by the show, my hypothesis is that local guys are now selling vintage at even lower than ebay prices---is that the same where everyone else lives?
Have a good one everybody and goodnight Pumpsie Green, wherever you are!
Posted by Carl Crawford Cards at 7:31 AM