This is the other card I pulled when going down memory lane the other night: 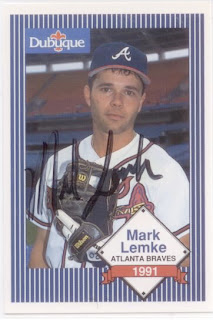 This is Mark Lemke circa 1990. In case anyone forgot, the Braves at this point are something of an abomination. They haven't been relevant since 1982 when they lost to the Cardinals in the NLCS. Sure, in they finished second in the old NL West in '83 and '84, but starting in '85 they'd go on an EPIC losing jag in which they'd lose 90+ games in 5 of the next 6 seasons. The exception was '86 when they lost 89. They were bad. This cat here was bad. They were ALL bad, in fact. So bad in '87 they traded they lone effective pitcher to the Tigers for some minor leaguer. Things sucked.
Then this happened. And this guy, this guy who even in the season had an OPS of .617 went NUTS to the tune of 1.170. 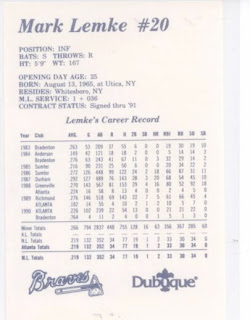 This, I'd like to think, is one if the things that makes baseball great. It's not just the one guy who comes through in a big way and his team wins. There's also the career-OPS .641 2B who blows up over a period of days, a guy who had 63 hits all season who has 10 in a few days, and 4 of those were XBH. He had one of the greatest WS ever. And yet his team still lost. Now that I'm older, I think we're all there at some point.
Any who, when I was a kid this wasn't quite an auto of Christ himself, but it was pretty darn close.
Have a good one everybody and goodnight Pumpsie Green, wherever you are!
Posted by Carl Crawford Cards at 8:00 AM