Headhunting Part I: Who Wants This Card?

OK, so here's the deal. I'm working on EJ rainbows. 2005 Bowman Chrome will take a while, but should be fun.

Over the past few days I've acquired the lion's share of the versions of the 2011 Topps Update Elliot Johnson Cards. I'm still missing the regular issue (go figure!), the gold (emailed someone who posted one), the Diamond sparkle edition, the Target Red Border, and two printing plates, one of which is here.

Here's where this card comes in. 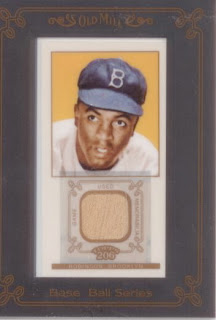 It's probably a Topps furniture leg, but still, it's a Jackie Robinson relic. If you can get the plate away from that guy, I'll flip you the Robinson for that plate and some assorted Rays (your choice, just assorted fun cards).
Why am I doing this? Well, for starters I'm on a budget, a budget which is tapped until December. I made this dude several offers, but he took none of them and ignored the last one. Keep in mind the BIN on that plate is $20 plus s/h, and I scored my two other plates for about $16 TOTAL. Maybe you'll have better luck than I did and talk him down to a fair price, meaning JR will be a steal. I made solid offers based on market value, but whatever.
So there is it. The link. The card for trade. The first edition of Headhunters around here.
Any takers?
Have a good one everybody and goodnight Pumpsie Green, wherever you are!
Posted by Carl Crawford Cards at 7:44 AM