Card Show Purchase #3: From the Way Back Machine

Second card from the random vintage box is the oldest one I grabbed at the show. It's also the cheapest. 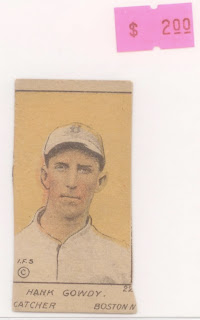 A 1920 W516-1 Hank Gowdy Strip card. Who knows if it's authentic, but who counterfeit a Hank Gowdy? The paper feels right, the colors look right, good enough for me. At any rate it wasn't even $2. AND it's the oldest Braves card I own, which is awesome.
Hank Gowdy had a 17-year career playing catcher and 1B for the NY Giants and Boston Braves. In 1920 he's coming off of a decent year in which he batted .278. That said, he's more of a clutch performer. For example, in the 1914 WS he set the series record for catcher BA, hitting at an amazing .545 clip against the Philadelphia A's.

Also according to Baseball Almanac, he was the first American ballplayer to enlist in WWI. He also later enlisted in WWII, and the ball field at Fort Benning bears his name.

Great stuff about a ballplayer I had never heard of before Saturday. And I got a great card CHEAP!