As in, "What would Freud say?" The card is so comically phallic as to tend to self-conscious parody, I mean the guy's last name is "Long" and that's some of the strangest, most awkward bat positioning I've ever seen coupled with a camera angle that emphasizes Long's, err, bat. 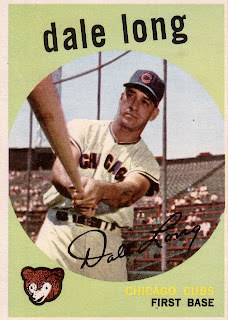 You might have caught this over the NIght Owl's or in the NYT recently, but Long is one of three (!) left-handers that have logged a MLB game at catcher in the past, oh, 100 years or so. Both Daddy D and compa are left-handers, and to hear him tell it they should be a protected group of people under the law. He's full of trivia about "great left-handers" and killed me with a question about who the 3 left-handed catchers were.
It's funny, because that bit of info even made it on to the back of Long's '59. 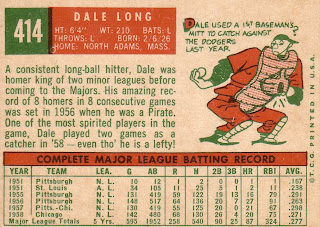 But check it out: he's catching right-handed and there's no mention of why he was catching or had to use a 1B mitt in the first place. Poor left-handers---even when they do something os trivially historical significance the rest of us overlook their left-handedness.
Have a great weekend and goodnight Pumpsie Green, wherever you are!
Posted by Carl Crawford Cards at 1:07 PM