til it's gone. Cue the hairbands, people. 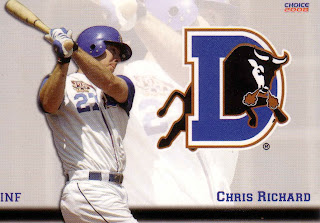 After the last post I've been thinking about how I miss Minor League ball. I've said it 1000 times, but I follow the Rays because I've lived in/near cities with Rays minor league affiliates, Charleston, SC and Durham, NC. It's always awesome to see the hot prospects come through on their way to the bigs (Price, David) or get stuck going over the basics before making it large in the bigs (Upton, BJ), but you watch the lesser guys over the years to the point you start to look through them. You just assume, like you, they'll ALWAYS be there.

I realized after my last post I left a lot unsaid about Chris Richard and Elliot Johnson, both of whom are professional ballplayers. I know, any dude who gets paid is a pro, but bear with me.

The words "throwback" gets tossed around a lot these days, too much in fact, but these guys are real throw back type players. Two more who come to mind are guys like former Bull Darnell McDonald and his brother Donzell. Darnell made an opening day roster for the first time in his career this year with the Reds at the age of 31. I watched Donzell play for the Leones of the Mexican League a few years ago when they won the championship. A dude who plays in the Bigs for a million plus per is NOT a throwback type guy. Guys like these embody it.

And I'll admit, I now realize that what I miss about watching Minor League ball is these guys, the guys you root for to have September call ups or to make the Opening Day Roster once, or one last time. Hell, they all started as HOT prospects but hit a wall somewhere whether due to injury, ability, or lack of opportunity.

I was doing my MA at Johns Hopkins when Richards came to Baltimore. He had tantalizing 2000, hitting 13 HRs in 221 ABs with the O's, and great things were expected. He had 15 HRs in 542 ABs the following year and was dealt to Colorado in 2003. I remember him coming to Durham a few years ago, and it almost felt like a mini-reunion although dude has no idea who the Hell I am. He didn't see the bigs again until last season when injuries to Carlos Peña pressed him into service. He didn't bat all that well and I remember the game where he made his only error. I was so excited for him to be up I felt sick after watching it. Another Chris Richard fact: he came out to the bar where Bulls fans congregated to watch the WS when the Rays made it a few years ago. How awesome is that?

Part II on Elliot Johnson is coming tomorrow. Feel free to share any stories you've got about players you've enjoyed watching, and beginning now if you have any spare Chris Richards or Elliot Johnsons I'll take them off your hands.

Have a good one and goodnight Pumpsie Green, wherever you are!
Posted by Carl Crawford Cards at 6:07 AM