I'm in Iowa until Wednesday with limited scanner access. Yesterday's card and today's are both Daddy D cards but I've had to get the jpgs online. I've done a couple of Wally Moon posts (here and here), and I think everyone agreed that Wally Moon had the all-time greatest unibrow. When I saw this 1960 Tex Clevenger while going through Daddy D's common box, I knew that a challenger for the title had emerged: 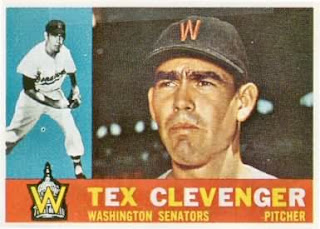 That brow is classic. But is it enough to displace Wally Moon?

As a player Clevenger had a solid 8 year career mostly as a reliever and spot starter, compiling a 36-37 record with a 4.15 ERA and a 94 ERA+. What's strange is that he retired after the 1962 season at the age of 29, a season which may have been his finest (he had an ERA+ of 133). Today he owns a car dealership in Portersville, CA, Clevenger Ford. Looks like that, at age 77, he could really kick you a@@ if he were so inclined.