So, an epic trade with On Card Autos. Around 75 Rays, numerous CCs, several Rays relics. Awesome. 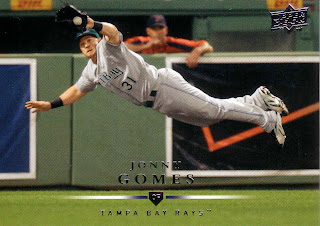 Another copy of this AMAZING Gomes card. Man, I can't get enough of it. Jonny's defense takes a lot of crap on the message boards, and a bit unfairly I may add. He's not the fastest dude around, but he'll give you all-out effort. Check out this card depicting a defensive play at Fenway. Great stuff, and a great card.

I don't like to rip on anybody around these parts, so I'll say this: either as a DH or RF I want this man on the roster next year. For Jebus' sake. 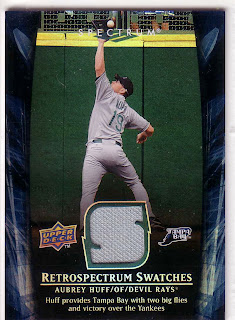 And speaking of defense, one of the relics from the trade, an Aubrey Huff. Man, is there a position Huff didn't play for the Rays? He's definitely under appreciated, basically the face of the franchise pre-CC. Funny thing about this card is it showcases his defense but celebrates his two HR in a victory over the Yankis. Weird. 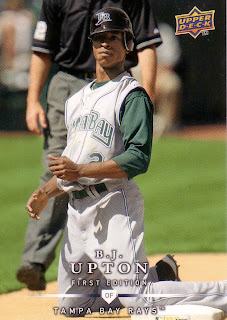 This is a great BJ Upton expression, like a Bart Simpson "Who, me?" BJ was an uber prospect for so long it's easy to forget he was born in 1984. Dude's young, and has only begun to tap his potential. One of those guys who's so talented, so athletic you think he's lazy or loafing but he's not----he just makes it look easy. Looking for a big comeback season this year after a down year last year, right Boss Man, Junior! 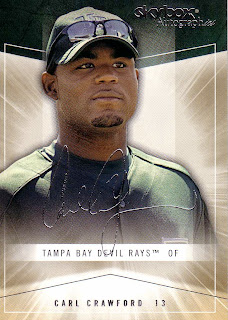 Compa says that here "CC looks like he's about to kick some a@@." Right on.

And finally, some trivia: 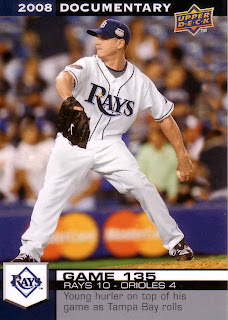 I have very few of the UD Documentary cards, and at some point need to get the ones from Sonny's CG shutout of the White Sox and the Rays/O's double header on September, the Rays games I got to in '08. So, who's on the front of this card? Kazmir. By extension, who was the young hurler who led the Rays to victory? 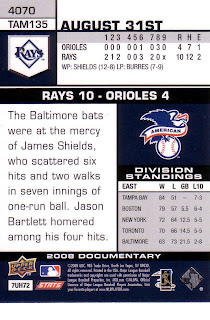 James Shields. Pretty lazy of UD to just throw any old Rays pitcher on the front as if most fans wouldn't know the difference. (And yes, sadly I'm sure very few did---aren't many Rays fans out there)

Thanks again On Cards Autos! Glad you dug the cards. Have a good one and goodnight Pumpsie Green, wherever you are!