A Guy Walks into a Bar: Shoeless Joe Reprints from Iowa

Which after Kinsella's book and the movie, may as well be Shoeless Joe's second home. Being from SC, one one my growing interests is ballplayers from my home state and the Carolinas in general. Makes me feel connected to my roots despite the fact I'm 3000 miles away in an igloo just down the block from Capt'n Canuck. My correspondence with one of the dean's of Carolina ball, Lou Brissie, has been particularly awesome.

So, when I came across these in Iowa last month I pulled the trigger. I asked the guy, "Can I take a look at those," to which he responded, "You know those are reprints, right?"

Now, I'm reasonably intelligent and was rather non-plussed. I mean, the cards were marked $1 (with a 50% discount), and anyone would assume that these cards were reprints. I will never be able to afford the real thing, and even if I had the cash must admit I'd be more likely to make ginormous charitable donation than throw down for one of these. 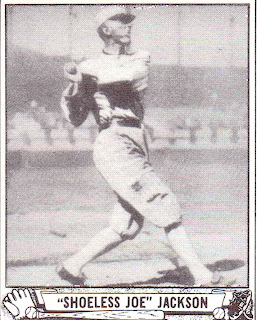 I dig the Play Ball cards in general, and this one is AMAZING. Joe taking a huge rip, with an expression on his face like he's watching the ball far off in the distance. Even looks like there's some chaw in his right cheek. That back is also nice: 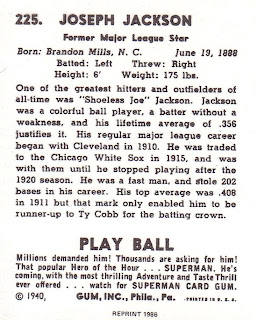 That's one thing people don't know about Shoeless Joe: he was traded around a lot before going to the Sox. Connie Mack of the A's thought he was just an illiterate, homesick rube. Each their own, but as a SC boy way up here in the snow, I can say I'm feeling a little Shoeless Joe these days. No pine forests, no Spanish moss, no oyster roasts, damn right I'm homesick now and again. 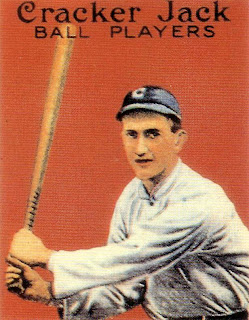 Oh yes, the Cracker Jack. One day I'd like to own a common from this set, or maybe a Charles Bender in terrible condition. This card will never be mine, but the reprint is fine by me. I wonder if that's his bat Black Betty in this photo or the one above. Or if Betty survived UD's wood chipper. Hope to God the answer is yes. The back of this card is also pretty awesome: 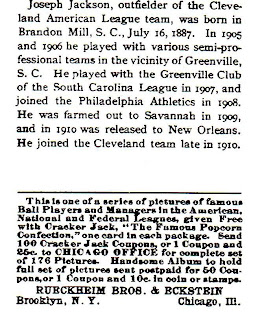 Unlike the Play Ball card, this one gets his birthplace correct, as in it's SC, not NC. There is a difference. Moreover, my mom is from Pickens County, where Shoeless Joe was born, and that's a big point of pride for a lot of folks in that area. I wonder how much 100 boxes of Cracker Jacks would have cost so you could land the whole set.