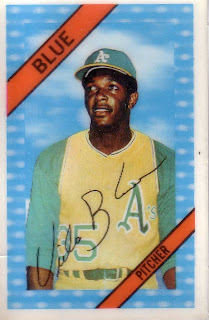 Vida Blue says "D@#! right." After Captain Canuck sent me this awesome 3D Blue, Daddy D dig some digging around in the vastness of his secret bb card warehouse and produced this gem. 99% of all the vintage goodness I post comes from him, and he doles it out in packages with cryptic messages from which I have to divine why different given cards are special. After he saw Capt'n Canuck's card, he sent me this one along with a 3D Fergie Jenkins from the same year simply because these cards kick ass. Well, they are no Sportsflicks (ha ha), but they are pretty awesome. The 70's are often overlooked in terms of bb cards and design, mostly because they followed the 50s and 60s, but as a decade cards from the 70s definitely have their own thing going on, and it's pretty good.

Which leads me to today. I'm in a good mood: end of the semester (thank you sweet lord Jebus), and I can honestly say that, having spent the last few months settling in, I love my job. I mean, I dig teaching. From the BS excuses about missing assignments to watching students learn more about themselves, their culture, and other cultures, I really dig it. Kinda like Mr. Blue up there looks like he feels about baseball. And yes, I'm aware of the issues that ended his career early, but let a man have his moment. It's currently -20 where I live (seriously) but life is pretty alright at the moment.

I'm off to spend the rest of the night relaxing and sipping some Templeton Rye (any thoughts on how to trade whiskey endorsements for free product I'm all ears----that stuff is good). Have a great one everybody and goodnight Pumpsie Green, wherever you are!