Well, there was no immediate response to my '55 Bowman Cubs post, so I figured I was in the clear. I got a great deal on the cards, had done my due diligence by offering them to Cubs fans in the blogosphere, and now I could keep them with a clear conscience.

Then I started hammering out a trade with On Card Autos, a Cubs-centric blog, and the cards became part of the deal. The Warren Hacker is my favorite, and before he heads out for better digs this post is for him. 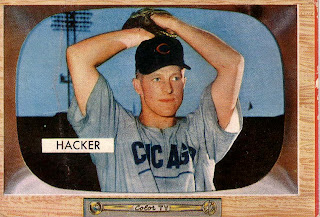 Aside from the typical '55 Bowman greatness there's nothing too special about the front. You have Hacker in a posed pitching shot, arms above his head, lights on the edge of the ballpark rising in the background. The lights tell us this isn't Wrigley, which is odd if only because Hacker is a Cub and you'd think they'd get his photo in the friendly confines. Any guesses on where this is? My favorite is the back: 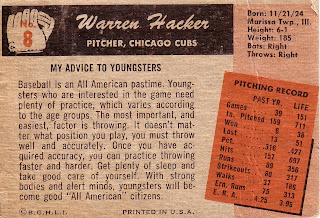 Instead of a bio, which seems to be most common for the '55s, we have Hacker's advice to America's youth. In a world where "athletes aren't role models," we have this blurb that equates sports with citizenship. I get too cynical at times about the state of things (I'm in education and yep, I fear we're all heading straight to Hell most of the time, despite whatever we might do), and this strikes me as a pretty awesome gesture. I wonder if this was Hacker's idea or Bowman's? I haven't seen enough of the '55s to know if there are others like it, but it would be cool to know. Either way, hats off to Mr. Hacker (he passed away in 2002).

Have a good one everyone and have a good night Pumpsie Green, wherever you are!