Don't forget about the Nelson Reimold jersey relic trade bait I've got up if you are interested.

This is one of those cards that a lot of people feel doesn't count because it goes back to a time before Price had played in the Majors. Whatever, it's a great card. 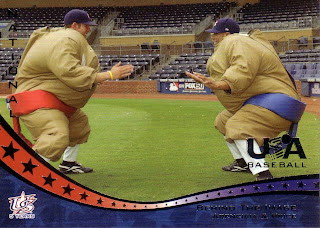 Now, I'm ready to admit that I love this card for reasons that might only be relevant to me and a few others. First, it's at the DBAP, home to the Durham Bulls and USA Baseball, Price's team when this shot  was taken. If you are ever in Durham, NC during baseball season you have to go to a game. The park is beautiful. Compa and I have gone to several games when the gates opened (about two hours before game time) just to sit and drink beer in an empty park and be alone watching the players warm up. It's a great space to watch baseball.

Second, it brings to the fore a DBAP tradition: sumo wrestling. It's one of the promos the Bulls do in between innings to keeps casual fans and folks with families interested and in the game. I'll admit, these sorts of things wore on me over time. We had a ticket package with some friends and went to a lot of games, and we went for the games, not this junk. Well, I went to a few Charleston Riverdogs games when I was homes last summer. Let me tell you, the promotions there are so over the top I'll never again complain about the ones in Durham. So yes, I get sentimental about the sumos now and then.

Third, I think it captures the camaraderie of non-big league ball. This is a canned moment but Price and Arbencina are hamming it up for the camera, even enjoying themselves a bit. It's a nice, goofy moment, the kind of thing I wish I could see with a beer and the compa from up in the empty stands.

Stay good in the New Year and goodnight Pumpsie Green, wherever you are!
Posted by Carl Crawford Cards at 8:00 AM