I spotted the '07 Turkey Red needs on Sewing Machine Guy's blog and, just by happenstance, had an SP he needed. I had purchased a few budget packs at Target for fun and was stoked I could send one of those cards along to help someone out. He offered, in return, something amazing: 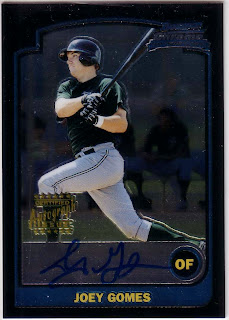 Your eyes do not deceive you, friends. That is a Bowman Chrome auto of Joey Gomes, Jonny's younger brother. This is supremely bada@@, and Sewing Machine Guy I'll tell you that getting this is pretty awesome. The highest he made it was AA, and he and Jonny were both in the Rays system at the same time. That must have been a lot of fun but it must have also been difficult. I mean, only being human, seeing your brother make the bigs while you're still on all-night buses across the southeast---that's gotta be bittersweet. (I say that as someone with a PhD from a public state university whose younger sibling got into an Ivy League school---you're happy for your sibling, but you're also a tiny bit jealous) It looks like Joey is now out of ball, having last played for the Joliet Jackhammers of the Northern League in 2008.

Well, before he sent the package out SMG ripped some more Turkeys and pulled this. He was gracious enough to send it along after I asked for it, which was an awesome gesture: 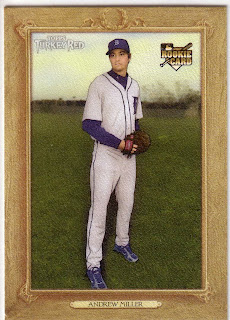 I was a graduate student at UNC for some years (too many years) and at one point Andrew was a student in one of my classes. I honestly had no idea who he was until I read a Peter Gammons article about Miller's dominating the Cape Cod League on summer, even being named MVP. Seriously, he was a like any other student, only one with a million dollar left arm. I found one of his old quizzes when I was moving out of my office to move to my job, and at some point I'll cut the sig and make it a "certified auto" (haha). I don't have many Millers, mostly because they were insanely expensive until recently. Sadly, I can now pick them up because Andrew's having prolonged difficulty translating his game to the majors. Hopefully he'll turn things around---compa and I are really pulling for him!

Thanks again SMG. Have a good one and good night Pumpsie Green, wherever you are!