Random Rays Coolness from Saints of the Cheap Seats

I was sitting there one day when compa brought in an unexpected package. I say "unexpected" because she assumed, incorrectly, I had been ordering contraband on ebay. For a moment I thought it was something I didn't remember purchasing (end of semester grading leads to a beer or six now and then). Fortunately for me, it was a pack of Rays goodness from Saints of the Cheap Seats, sent over "just because." Compa was stoked for, among other reasons, I hadn't spent us into the poorhouse, so I let her pick out her faves. 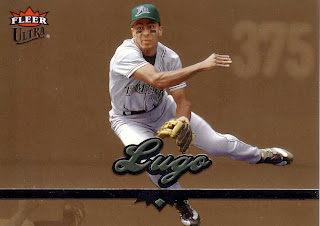 "Julio Lugo looks crazy." And I'd have to agree. The "375" on the outfield wall contributes to the chaotic action on the card. Did he ever come down or did he just float off into space? 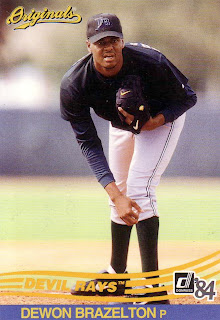 "This card's just weird. It says '84 but it's obviously not '84. Are there Orwellian overtones here?" Brazelton was a first-round pick who never quite lived up to expectations but really, who does? It's strange to think of this set as being in the neo-vintage genre, but there it is: a redo of the classic '84 Donruss. And calling it "Originals" is pretty ironic, given that the design is a repeat. 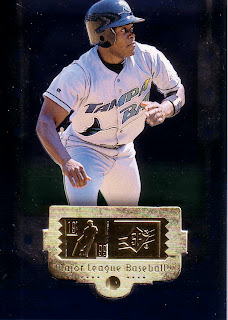 "Whoa." I'd have to agree. This card didn't scan well at all, so you'll have to imagine that it's half-way between an Action Packed card and a relic. McCracken is slight raised (Action Packed) and the MLB/SPX logos are recessed into the card like a foil relic. Strange, but very awesome. McCracken is a NC boy (big plus) but he went to Dook (big minus). He had a solid career and bounced around between several teams, first getting shot at a full-time gig with the Rays in '98, a year which was one of his best (the BEST being 2002). The '99 UD SPx card brings up the fact that '98 was his first full-time gig and that he responded with what was then his best season, but by '99 he was no longer a full-timer. Strange how those things work.

Thanks again Saints! Have a good one and goodnight Pumpsie Green, wherever you are!