Catching is tough. Between calling pitches, getting punched in the face by Carlos Zambrano, run over by Elliot Johnson, and being the closest guy to the taunts of the fans, it makes sense that catchers are also the most likely to have a religious experience during a game. I know that Boog Powell finding Jesus in 1975 is one of the all-time highlights of cardboard collecting, but we can't forget the catchers. 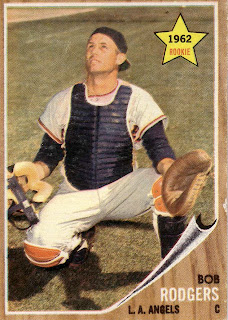 Funny Topps lists him as "Bob" instead of "Buck" if only, as others have recently pointed out, Topps had no qualms about listed other guys as Zorro. Certainly, as "Buck Rodgers" he would have kept up the intersection between baseball and ass-kicking fictional TV heroes from that era. As "Bob" he's more likely to drive a Schwann's truck.

Not only did Bob, or Buck, finish 24th in the '62 MVP voting, he also finished 2nd on the '62 AL ROY voting to the immortal Tom Tresh. As his '62 Topps makes clear, this was due primarily to his in-game visions of the Virgin Mary, who not only told him what pitches to call but also what pitches were coming when he was at the plate. If only we were all so lucky. Not only would we have all been better ball players (as opposed to people who blog about cards of ball players), but existential questions would have been moot, thus making life less uncertain albeit also less interesting.