Tim Stoddard Had a Way With the Ladies

Seriously, when was the last time you saw a card of a guy doing NOTHING, not goofing off with other players or signing autos, but talking to someone in the stands.

And check out Tim Stoddard: he's got the perfectly coiffed hair of a nineteenth-century English school boy and the mustache of a sheriff from a spaghetti Western. For all I know that's a guy he's talking to, but these are clearly the signs of an NC State attendee getting his groove on. Somehow, someway, why is it that this dude was always hitting on your girlfriend in high school? And how did a shot of him "in action" make it into the 1982 Topps set? 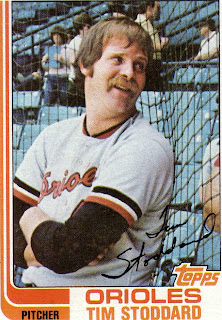 Tim had a solid career as a reliever from '75-'89, bouncing around a good bit as middle relievers are wont to do. He has a lifetime ERA+ of 100, which makes him one of the kings of league average production. Not that that's something to turn up your nose at. After all, without pointing fingers, there are plenty of dudes out there who have played for longer with bigger contracts and been BELOW average.
He saved 26 games for the O's in 1980, which was probably his best year. Be interesting to know how those translated into his game in the stands.

Finally, according to his wiki page, Stoddard is one of two guys whose teams have been in both an NCAA Final Four game and the World Series. The other is Kenny Lofton.