These cards come courtesy of Traded of the Year Wicked Ortega. This Gomes Pristine is actually a sweet bonus card Wicked threw in. I'm not a big fan of cards where the design overtakes the photography but I have to give it up. 2003 Topps Pristine is pretty nice. Gotta keep a look out for the CC. 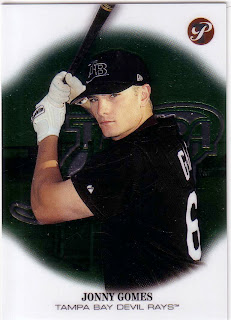 And then we've got the object of the trade, a Justin Ruggiano auto. 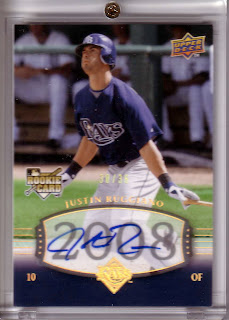 Ruggiano was one of my favorite Bulls. I've posted a lot about him elsewhere, but I'll add this. Having been to a number of minor league games, I don't have much of an idealized picture of the minor leagues or the interaction between the players and the fans. Things today might be a lot more "fan friendly" with in between inning activities designed to keep everyone amused in every down moment, but I remember a lot more interaction when I was a kid on all levels. I remember sitting down next to the dugout talking baseball with the players. Nelson Liriano even signed a ball and tossed it to me in the middle of a game once. Who knows why? He just did it.

Ruggiano might not do stuff like that, but he's that kind of player. A few years ago I was in the RF stands in Durham and the guys in the first row kept trying to make conversation with him while he kept loose throwing while the pitcher warmed up. Not talking trash, just talking baseball. After an inning or so Ruggi warmed up and they spent the rest of the afternoon hamming it up. I wasn't in on it, but every baseball outing should be that awesome: summer afternoon, full beers, a bunch of guys chatting up the RF about a double he'd hit the night before, the RF responding with the typical baseball answers that belie his sh!t-eating grin. He had a down year last year, but he's a major-league player. If not for the Rays then for someone, and soon.