Not quite as classic as the Bob Rodgers, but another convert nonetheless. Jerry Narron hears the celestial choirs, he's going down the aisle, we have another believer in the ranks of the saved tonight. 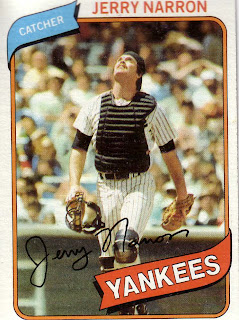 As an aside, I noticed someone "unfollowed" the blog after the Bob Rodgers post, so I figured I'd just get this out there. The CCC series "Catchers Finding Jesus" is definitely a tongue in cheek look at spirituality and catching. It's not a knock on spirituality, religion, or Christianity. It's a look at some great cards. For the record I grew up in one of the more repressive/oppressive Protestant denominations imaginable and yet have managed to cobble together some semblance of a fulfilling spiritual life, which has taken years to accomplish. As often as players pray to do things like catch fly balls (see Sunday, Billy) or credit a high power for their success (see most any post-game interview), I think that catchers finding Jesus happens a lot more than Topps photographers or this blog will ever capture. Just my two cents.

Have a great weekend! (And yep, I was working on this post and it got published out of turn by accident. D'oh! Ken MacKenzie will NEVER get his day in the sun)

Posted by Carl Crawford Cards at 9:48 AM