FOC and I worked out a trade starting innocuously enough with this card. 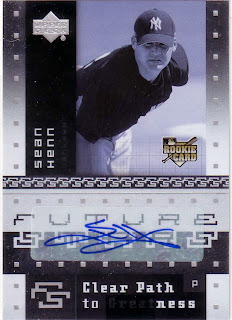 I know: who the Hell is Sean Henn? Well, he's a guy with decent success in the minors that just hasn't translated to the majors. Yet. Several teams have given him a shot (Yankis, Padres, Twins, O's), but he hasn't set the world on fire. 2-9 career record, ERA of 7.56 and ERA+ of 58. But he's a lefty, so he'll be getting another shot with the Blue Jays this spring, continuing his journey through the AL East.

So we did "who," so now "why." Back at the Twins auto thing last summer there were two players NO ONE selling cards around there had cardboards of, one of which was Sean Henn.

(As an aside, while I was running around trying to find a Sean Henn card, I caught a dealer kind of being a prick to a kid about which Joe Crede the kid was going to buy, basically saying "Make up your mind and fork over $2 for my overpriced cardboard." The kid was kinda distraught and walked away, so I tapped him on the shoulder. "Here are 3 different Credes, kid, take your pick." He was pretty stoked, and when I turned around that guy was giving me a classic "$#%&%" look. Whatever, it's a hobby, man. I know adults should have been better to ME when I was a young collector, so hopefully that kid will pass it on.)

As for Henn, I had purchased a Twins hat the night before, just in case I didn't have cards of different dudes. Which now I didn't. So, I got in line to get Nathan's auto, and both Henn and Luis Ayala were signing with him. It was still about 10 minutes before the thing started, and I got to talking with the usher, an older grandmotherly type who had an obvious affection for the players. She asked me what I was going to get signed and I showed her the Nathan.

"Do you have anything for Sean or Luis?" she asked. I showed her the hat. "That's good," she responded, "you'd be surprised how many people just walk by the guys who aren't All Stars. I always feel bad for those boys." (She said boys).

It's not that I feel bad for any dude who's a ML ballplayer, something that I once aspired to be (who among us didn't?), but I'll tell you this: Sean Henn's no AS, but he's made it further than I ever did. He may be having a rough time of it, but he's also living out a dream few people ever realize and #$^& it that's worth something. Still, dude had to sign my hat because NONE of the dealers bothered to bring his cards.

So, when I saw this card posted over at Field of Cards I figured I'd try for a trade. Also were included were a number of CCs (post to come!) that put me over the 300 mark. Thanks again, FOC!

Posted by Carl Crawford Cards at 9:00 AM