So, another clue was "ripped shirt," and this 1957 Topps card of Ted Kluszewski. 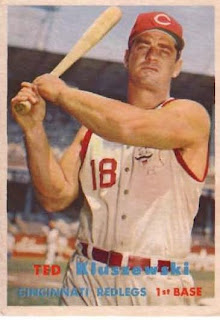 Still not sure what the old man meant, but I did find this great post (featuring the same card!) over at POBC, where the authors say Klu had to cut the arms of his uni because his guns were so big the uni restricted his movement on his swing. And this is before roids, so we can assume that Klu's pythons were 110% natural, most likely acquired during cow-throwing competitions at his alma mater, Indiana University. 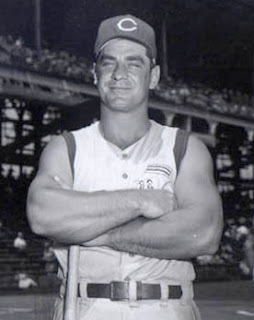 Seriously. I'm a built well enough but my arms roll around uninhibited in every shirt I own. I cannot fathom the maniac Klu must have been in the weight room to have guns like that. Or maybe it's just that his parents made their living as iron smiths and his moms is just as comfortable wielding a 75 lb. hammer as his dad is. Who knows? I imagine that in the off-season he was Mr. Redlegs's collection agent. That dude shows up at your door you pay up, no questions asked.
And once again, a beautiful vintage back: 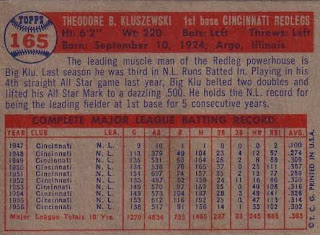