We do it like this. Having moved from the Durham area about 7 months ago, compa and I missed out on seeing the Bulls win the International League Championship. And then the Bricktown Showdown for the AAA Championship. Which sucked for us, at least a little, seeing as last year we sat there and watched the Scranton Wilkes-Barre Yankis take to to the Bulls in the International League Championship. Nothing so much against the AAA Yankis as their fans who, despite being AAA Yankis fans, were definitely ready for the bigs in terms of being some of the most....well, I digress.

We missed out on all the post-championship euphoria. We watched the showdown on ESPN2, which was great, but we missed out on being there with our friends and the Bulls. There was even a Bulls event where you got to go into the dugout out onto the field and meet Chris Richard and Elliot Johnson. Well, my former neighbor over at Noboru Aota was kind enough to send me a post card. One signed by the aforementioned Chris Richard and Elliot Johnson. Awesome! 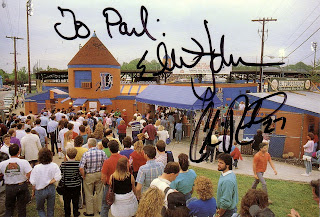 Man Adam, I can't thank you enough. For those of you who don't know that's the old park, the one in Bull Durham, located a few blocks from where the Bulls currently play.

Have a good night everyone and have a good one Pumpsie Green, wherever you are!
Posted by Carl Crawford Cards at 6:47 PM