I know I misspelled Chris Richard's last name "Richards" several times in the last post. I had to mention it, or compa would be packing her things. 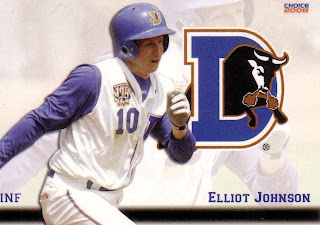 Like Jonny Gomes, I imagine that your average Rays fan 10 years from now will not know who Elliot Johnson is. This says a lot more about our culture and our preference for the flashy and trendy than these two ball players. Elsewhere I've posted my feelings about Gomes and his instrumental role in serving notice to the rest of the AL that the Rays were no longer doormats, so this post is about Johnson and his role in those same events.

First, Elliot is a super fan friendly guy, like Richard. A friend of mine one complained about how some of the Bulls, especially in the wake of their success over the past few years and the Rays WS run, basically gave up on interacting with the fans. I don't know whether or not that's 100% true, but I do know that I have seen kids standing 20 deep, all screaming "Elliot," waiting to get a sig, and that Elliot has stood there and signed until everyone had an auto. I never asked for one myself, which I now kinda regret, but there you have it. (As an aside, I similarly watched the O's Adam Jones sign for about 30-minutes prior to the Rays/O's double header two seasons ago. Again, no auto for me, but that made quite an impression)

Second, and like Richard, Eliot is no slouch as a player. Elliot has a decent bat for a middle infielder and Rays Index has this play from the Int'l League Championship as the Rays organization's play of the year. Elliot only got a brief cup of coffee with the Rays in 2008, and it looks like this past season will have been his last with the organization (scroll down to the last bullet point). Although he advanced pretty quickly through the Rays' system he has been a victim of organizational depth as much as anything else. I mean, without naming names, there are guys on ML rosters whose stats are far less.

Third, he's another guy who plays all out. The first brawl Gomes was involved in? It came after this play. I'm no unbiased observer, so I'll tell you a different play at the plate story for context. When I was a Little Leaguer I was a pretty fat kid who ate, slept, and drank baseball. I was a solid hitter, but obviously no great runner of the bases. Championship game, I'm on second and the batter hits a soft single to right. The coach sends me home, which I still think is one of the stupider decisions I've ever been a part of. Ball beats me by a bit, OK a lot, catcher is blocking the plate, so I absolutely blew the kid up. Seeing as how the ball beat me I'm initially called out. But the ball is now over in the on-deck circle, so the call is reversed and I'm called safe. UNTIL the other ump comes in from left and re-reverses the call, saying that not only am I out because runners coming home MUST slide, but that technically I should also be tossed from the game. I had no idea about the rule, and let me be square with you: that wasn't the worst thing that ever happened to my fat 13 year old self, but it was up there. Between my teammates and coach calling me out the next few innings things really sucked. Of course we lost and I caught unmentionable Hell for it from all involved. As far as I know no one ever got on the coach for a) sending the fat ass home from second on the play or b) no bothering to inform us we had to slide going in to home.

At any rate, this is all to say I'm totally behind Elliot Johnson on his collision with Cervelli now and forever. My fat 13 year-old self would agree. That is how the game should be played. If not, then don't block the plate, period, or go back to Little League. As for the current narrative, the next day the Yankis retaliated, Gomes clowned several Yankis, and the rest is history.

I hadn't thought too much about that play until I saw this card over at a post at Play at the Plate:

A signed Elliot Johnson depicting the Cervelli play. Improbably enough, his base card is also of the same play: 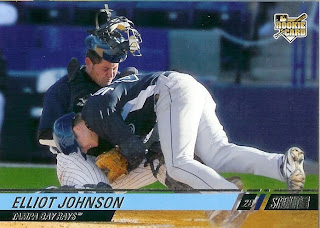 Both are from the 2008 Stadium Club set, and I'm going to try to get my hands on them ASAP after the first of the year. Hopefully by trade, then by bounty, and finally via flea-bay if all else fails. Not only is this a great card of one Hell of a player, but it also depicts THE moment when the Rays fortunes changed for the better. Who knew that one hard play at the plate could send a team to the World Series?

Thanks for the memories Elliot, loved watching you play.