I've been out of the ttm game for a while but recently started up again. First up: Yankees and Dodgers legend and ttm superstar Al Downing. These cards come courtesy of the father-in-law who, being a Dodgers fan, would only part with Yankees-era Downings. 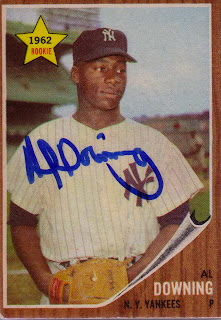 I'm addicted to the "stadium looming over the young pitcher's right shoulder shot" that was popular in the '50's and '60's. You'd think this was Yankee stadium given Al's uni, but that doesn't look like the overhang from YS in the background. Any thoughts? 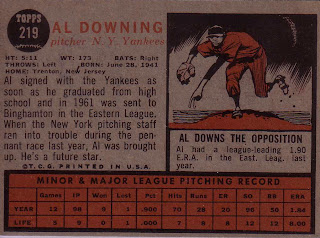 The 1962 backs are nice, and the image of Al here is pretty menacing. Gotta even like the "Al Downs the Opposition" pun.
Next up the 1964 and a place that is undeniably Yankee stadium. 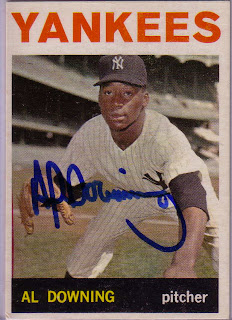 Again a really nice set and a really solid card, a variation in the "stadium over the pitcher's right shoulder" shot.
As a kid I LOVED the backs here with the rub off mystery message but never had any to see up close. Even now they're pretty cool, a reminder of when defacing cards was part of the fun. 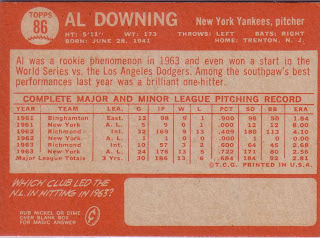 Sadly, no menacing cartoons.
Thanks Mr. Downing.
Have a good one everybody and good night Pumpsie Green, wherever you are!
Posted by Carl Crawford Cards at 9:00 AM