Another gem of early/mid-70s Topps photography. 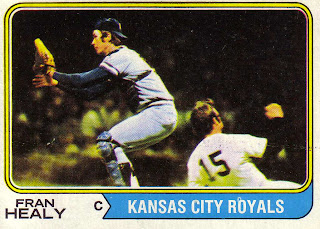 I was sure Night Owl has had this one up at some point in the "Great Night Cards" series but I couldn't find it over there. However, if you were to ask the compa, she'd tell you I'm not the best finder of things.
We've got not one but two catchers here, with the focus of the card being split between them: Fran Healy and Thurman Munson, with Munson once again butting in on someone else's card. I wonder if Munson collectors would consider these as being part of Munson's card list?
We've got the "dirtsmoke effect" (or is it bad focus?), Munson giving a small fist pump as he slides across the plate, and Healy waiting for a ball that is obviously too late.
Or is it? Munson's scored but what I really like about this shot is how Healy suggests there's another runner out there rounding third and that the throw is actually meant to catch him. In other words, even though Munson occupies half of the card he's irrelevant to the "action" part at this point, with what's about to happen being the real focus of the photo. And yet we still need Munson there to set that up. GREAT stuff.
Healy himself had a solid career with a slightly below average lifetime OPS+ of 91. The back of the '74 has some great Americana-style facts: 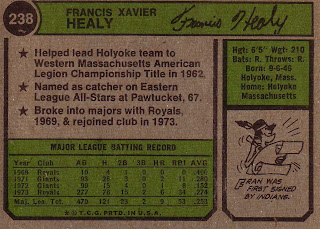 He was a Legion ballplayer and something of a AAAA player in the late-60s, coming up for a cup of coffee in '69 and having to wait until 1971 to get another shot. His last three years were 1976-78 when, oddly enough, he was a backup to none other than Thurman Munson.
Have a good one everybody and goodnight Pumpsie Green, wherever you are!
Posted by Carl Crawford Cards at 8:00 AM