For post #400 I thought I'd roll out one of the weirder cards I've come across in a while: 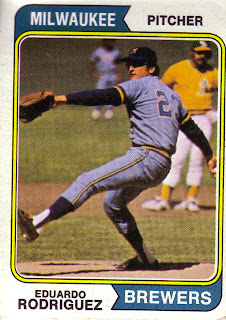 On the surface it's nothing special: Eduardo Rodriguez looking goofy out of the stretch delivering the ball to home plate. But check out the runner on second: not only is he not taking a lead, he's leaning over talking to the 2B! And the CF, he's got his hands on his hips. Now I'm sure all of this is because Eduardo is warming up, not really pitching, but I don't think there's another card that has quite so much dissonance with regard to the action. Usually everyone's in motion, about to be in motion, or standing still. Here we've got an odd juxtaposition of both which, as I'd like to suggest in the title, says "little-league style blowout" like nothing else. There's almost a disinterest in the runner and CF that I've never seen on cardboard. 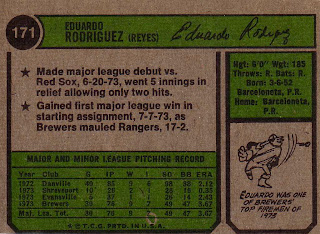 As for Rodriguez this was the beginning of a 7-year career, 6 with MIL and 1 with KC. He passed away in '09 at the age of 57.
Have a good one everybody and goodnight Pumpsie Green, wherever you are!
Posted by Carl Crawford Cards at 8:00 AM