Recent Pickups and Thanks

As anyone who reads the blog knows, I'm kind of like the Blanch Dubios of the blogosphere. Since I don't rip new product I have to "depend on the kindness of others" to acquire new CCs and other Rays.

First up, the 2010 Bowman Platinum from Hackenbush. 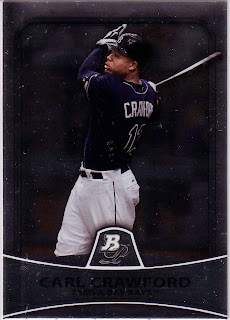 Given the flak BP has caught from some corners, now that I can see the final product for myself, I'll say this: I think that peoples' response to Platinum is more a result of the glut of products out there than BP per se. It's a nice card, the design is solid, and I'm happy to add this one to the pc. However, I understand how a lot of folks, in a world already crowded with Bowman, B Chrome, BDP, etc., just let out a groan.
Meanwhile, The Angels in Order was dumping some chrome. I threw in for the Rays which, if you've opened a lot of chrome, seem to be underrepresented. Although it was only 1 card Tom insisted on sending it on, throwing in a Peña for good measure. 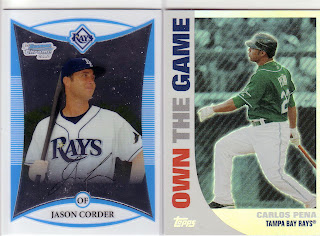 Corder was a Rays 7th round pick in 2008 but, judging from the absence of 2010 stats, he may already be out of baseball. At any rate having his own card and being drafted is a heck of a lot further than I made it, so that's still pretty awesome.
Then we have the shiny Peña. My compa's comment: "It's nice when people thin of me in your card collecting."
Well, there we have it. Thanks again, gents!
And good night Pumpsie Green, wherever you are!
Posted by Carl Crawford Cards at 8:00 AM