Blast from the Past: Chris Burr

I'm a big fan of minor league ball. As much as part of the family ritual in the summer involved going to one Braves game a summer, a much bigger part were the minor league games we took in down in Charleston. College Park was where I learned to watch the game and be a fan. As the link over there say, it has an antiseptic sort of charm that's the opposite of most contemporary parks. In fact, one of my very first posts was about the Rainbows that used to play in College Park and a card I got from Dinged Corners.

Well, I recently came across an old stack of Rainbows and, getting all nostalgic, decided to contact one of the former players to see if he'd sign one of them for me. 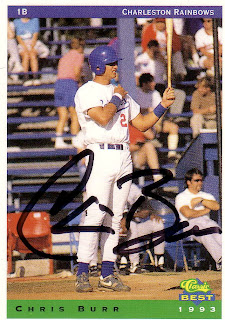 That's my childhood in baseball on a single card: wooden grandstands, folding chairs on the field, and a daytime crowd that would be hanging around for nickel beer in the nightcap.
And then, of course, we've got the aspiring minor league slugger toiling away in 100% humidity for his shot at the bigs. He's currently an assistant coach at Tulane, as well as a coach in a collegiate wood-bat summer league, but back then he was a 1B prospect for the Texas Rangers. 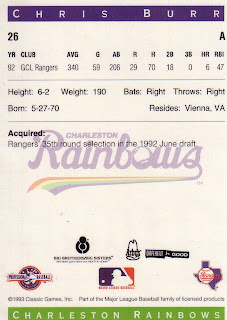 He hit .340 with a .902 OPS the previous year in the GCL, but that summer in Charleston, 1993, he hit .235 wit 10 HR, and that was his last in the minors. He's obviously been a really successful baseball man  as evidenced by his current coaching positions, and it's great to think that one of the guys I grew up watching is still in the game. It's also awesome he took the time to sign this card for me, which I really appreciate.
Have a good one everybody and have a good night Pumpsie Green, wherever you are!
Posted by Carl Crawford Cards at 8:00 AM