My scanner won't quit cropping white border cards and I'm tired of wrestling with it. But don't let that detract from the absolute insanity of this card, Jeff Treadway. 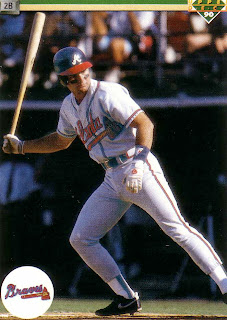 Seriously, when was the last time you saw a dude take a WALK on a baseball card? And the fuzzy security guard in the background (I'm assuming that's why he has a tie) is another weird touch. Why aren't there more walks on baseball cards? In fact, is there even another in existence?
Treadway was a hard-nosed utility guy for the classic comeback Braves of the early 90s. Jeff was a pure Georgia boy, as in from GA, plated ball for GA, drafted by the Reds but played the meat of his career with his home state Braves. He's one of the guys you wish could have been on the WS Champion team since he was there at the beginning of the turn around. A suitcase kind of guy, he just showed up, did his job, and went home, a real pleasure to watch.
Have a good one everybody and goodnight Pumpsie Green, wherever you are!
Posted by Carl Crawford Cards at 9:08 AM