Wicked Trade: (Long Over Due)

I could blame it on my slow scanner. Or pure laziness. Or my fondness for wine within 5 minutes of hitting the door when I get home from work. Or all of it, take your pick.

At any rate, I've fallen behind in trade posts, starting with an epic trade from Wicked Ortega. Well, this is my end. 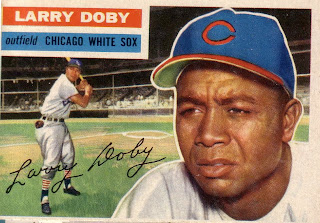 I'm not a huge Miggy fan, but he's one of the best players in the game and it would have taken something pretty badass to pry that card from me. Well, this is more than sufficiently badass. Since Doby is from SC I pick up his cards whenever I can afford them, and this was a score. I'll go into it in more depth this summer when I do Larry Doby week again, but for now I'll just say "YEAH!"

Worked out in the trade were some other Rays cards. 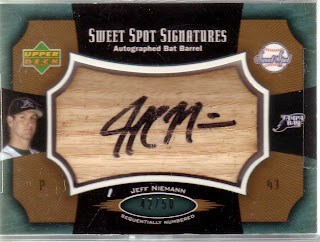 I don't get too much into the high end stuff (is Sweet Spot High End? Low End? Mid Range? Hell, they sell is at Wal Mart, right?) or even serial numbered cards because of the cost. So: I'd never seen this card or one like it before and have/had no idea of it's value. First: that's not a bat chip. It's a 1/2 inch thick piece of bat embedded in a card that's more like a shadow box. Pretty awesome, and I had no idea what I was getting.
Then this CC jersey: 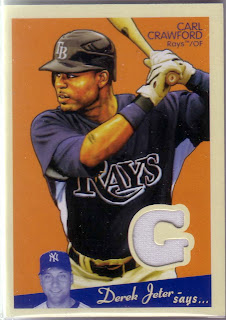 CC jerseys are always good, CC jerseys with Derek Jeter on them....I just don't know.
And most importantly, as a throw in for the person who tolerates my collection (and has yet to see my recent ebay purchase come up on the credit card bill): 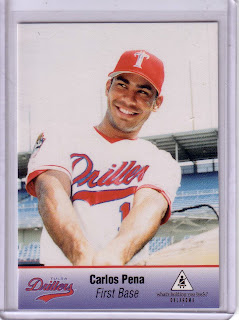 It's the smile himself, Mr. Carlos Peña. It was immediately one of the compa's favorite cards and it's her first minor league CP. Thanks for throwing that in, Wicked, and for the epic trade in general.
Have a good one everybody and goodnight Pumpsie Green, wherever you are!
Posted by Carl Crawford Cards at 11:27 AM