2008 Ginter Code Champ Jason Wong had a badass contest over at his blog, which you need to check out. The prize: two cards signed by the champ himself, one in Chinese and one in English. Check them out. 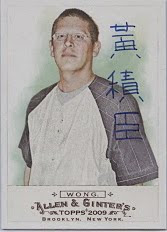 I spent a year teaching English in China, so this is pretty awesome to have. My Mandarin is pretty basic at this point, but I remember enough to recognize "wong." Kinda. 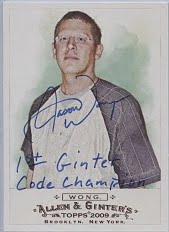 And then the "traditional" English signed card with the "1st Ginter Code Champion" inscription. Very cool stuff, and thanks again for the contest, Jason!
As an aside, the contest Jason ran was pretty cool. Apparently the inspiration came from an autographed bat he has in his collection, and the structure of the questions meant you had to count Negro League stats as being "official." As a big fan of the Negro Leagues, I thought that was an awesome move!
Have a good one and goodnight Pumpsie Green, wherever you are!
Posted by Carl Crawford Cards at 9:50 AM