Pinch hitting: Roy Howell and Where I Been

At first it was job-related stress, then it was the plague. I've been lurking on blogs, not commenting as much as I'd like, but finally, today, I'm back to bring you Roy Howell. 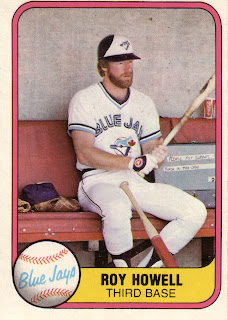 This is another of the really strange shots I prefer. For example, we think of dugouts as full of ball players, equipment, scattered sunflower seed shells and other baseball flotsam. Here we have Howell almost blending in amongst the junk: multiple bats, some gloves, a spare hat, an aluminum container with indecipherable writing, a Coke cup with a plastic straw. I really like how Howell, in addition to holding a bat and having on a batting glove, has on a helmet, like he's gonna go bat at any moment.
And Howell DID have a solid career between stops in Texas, Toronto, and Milwaukee, league average lifetime OPS+ of 98, made the AS team in 1978. Another "have bat will travel type," the kind of guy who's way underrated in the game. This card really captures that.
Anyway, tomorrow I've got a small HOF trade bait post coming, looking for some CCs to ring in the new year.
Have a good one everybody and goodnight Pumpsie Green, wherever you are!
Posted by Carl Crawford Cards at 2:44 PM