I've posted before about Mr. Bobby Shantz, so I'll spare you about how awesome I think he is. And I'm not alone. Mr. Shantz is real tolerant of us ttm aficionados and his praises are all over the blogosphere. In fact, every day I'm a bigger fan of mid-20th century because of guys like Mr. Shantz, Mr. Trucks, and Mr. Sievers (and there are tons more!)


Last December I bit the bullet and grabbed this 1950 Bowman Shantz RC with the intention of sending it off. I sent it to Mr. Shantz a few weeks ago and got it back within 10 days. 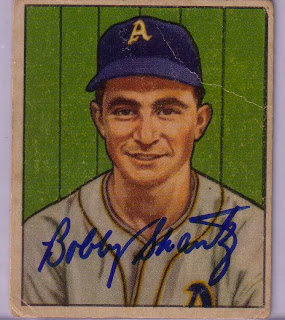 As a card this thing is AWESOME. It's one of the "knothole-gang" type portrait cards from the 1950 Bowman that reminds you of wooden fences and apple pie baseball. Mr. Shantz loos 12 and the wood-plank wall looks, well, GREEN.
And then there's the sig: ^%$^ that's nice, even better than I'd pictured it or could have reasonably expected.
Of course, the backs of these things speak for themselves. 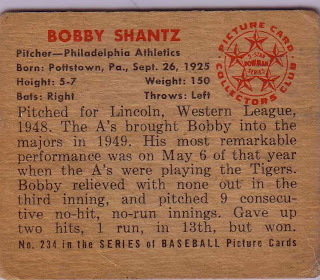 Thanks again Mr. Shantz and goodnight Pumpsie Green, wherever you are!
Posted by Carl Crawford Cards at 8:00 AM