What a Difference a Year Makes: Early 80's Stone(r)

Let's get this straight: I LOVE Steve Stone. Like many of you, as a kid growing up I knew him as the straight man to Harry Caray's antics on WGN. It's a shame the Cubs ever let him go and a much deserved kick in the pants that the White Sox picked him up.
Well, a while back I came across this card of Steve's from what were apparently his wild man days: 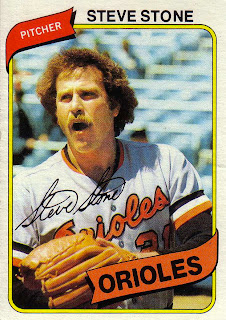 And I DO mean wild. The hair, the 'stache, the "who gives a rip?" expression, it all points to a man on the edge. And I guess he was, as in "on the edge of a great season." In 1980 the previously average Stone would go ape in Baltimore, compiling a 25-7 record with an ERA+ of 123. He made the AS team for the first (and only) time, as well as landed the Cy Young. And what isn't a man like that capable of? 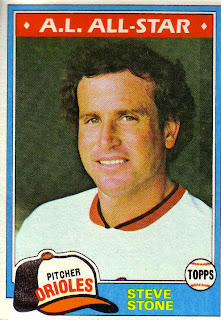 I know, wha?! This was wild man Stone during that magical 1980 season. He looks like he'll be stopping by the house later to sell you some insurance, doesn't he? Oddly, having recovered from his Hell's Angels years, he 1981 was to be his last year in baseball as, according to the Wikipedia, he was plagued by tendonitis all that year and decided to hang it up. Guess he was the Iggy Pop of early-80s pitching.
Have a good one everybody and good night Pumpsie Green, wherever you are!
Posted by Carl Crawford Cards at 8:00 AM