A country boy from KY, Fryman had an 18-year career with the Pirates, Phillies, Detroit, and Expos, among others. He was a rubber-armed SP and RP, and a two-time AS. 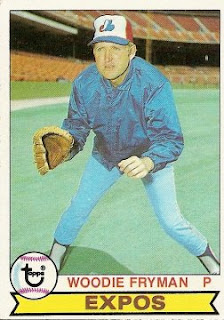 As more guys from the '50s and '60s pass, the baseball community loses a little more of its history. And when guys like Woodie pass, I'm reminded of the mortality of my own parents, who not only grew up watching baseball during that era but are also of that same generation.
RIP Mr. Fryman.
Posted by Carl Crawford Cards at 10:16 AM