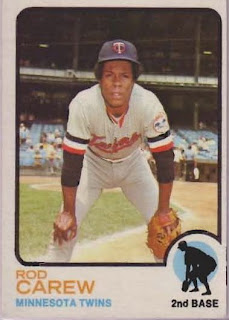 CCC will be on a brief hiatus this weekend as my spouse declared that, for our anniversary, we should go to the Twins game this Friday (she is actually a baseball fan, so this is more a good idea than sacrifice on her part). To sweeten the deal, we scored tickets to the Twins autograph party on Saturday. Which brings me to a good dilemma to have: what do you ask people to sign? I'm going Heritage with current players, but that leaves me without anything for the older guys.
There have been several cool posts recently where folks have designed their own cards to have autoed, but I'm simply not that talented with the computer, and won't even try. So, I'm going to have them sign some vintage. My 1973 Rod Carew won out over my 1972 (open to hearing others' opinions on that one, it was tough to decide), and I picked up the '68 Killebrew All-Star at the card shop ($8, but it was in hand). So, what do the rest of you think about having players sign older cards? 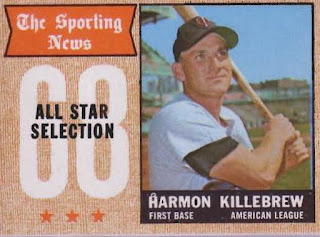 Has anyone else done it?
I'll let you know how things turn out.
Posted by Carl Crawford Cards at 5:51 PM