Portraits of the Player as a Complete Nobody 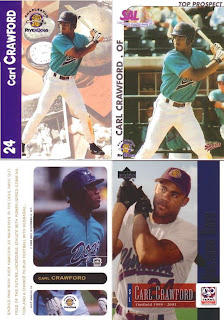 OK, it might be a bit disingenuous to say that a player drafted in the second round was ever a complete nobody, but we'll get back to that. For the moment, here are four Carl Crawfords featuring him sporting a Charleston Riverdogs uni. Tops left is from the 2000 team set, top right from a 2000 South Atlantic League Prospects sets, bottom left from 2000 Just, and bottom right from UD. The designs and photography aren't anything to write home about, but I imagine minor league cards are a labor of love for the folks that produce them. The picture on the back of the 2000 team card is actually pretty awesome (Crawford following through on a swing, first-base dugout in the background), but it doesn't fit the overall feel of the set and, being in black and white and covered in text, won't scan well. At any rate, I'm grateful they still included it. In these pics Carl is basically still a kid (he's 19), and you can see it in everything from his physical build to the expression on his face. He doesn't have the all the great tattoo work yet, and if you really look at the top two cards you'll notice that despite 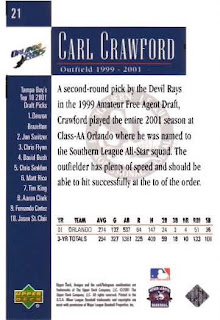 the high level of concentration he's awaiting the pitch with a degree of uncertainty that all minor league players face. He's a second round pick, and yet might spend the rest of his career trying to hone his swing along the Ashley River. He actually looks worried.
At this point in his career he is a nobody, and his expression betrays an at least vague awareness of this fact. The UD card says it all, first by have a pic of Crawford in his Riverdogs uniform while listing his team as the AA Orlando Rays. On the back, in a list that underscores the uncertainty of the great prospects, we have a rundown of Tampa's 2001 draft picks. And let's not forget, in the wake of last year's Series run the MSM have finally picked up on the wealth and depth of talent in Tampa's farm system due and Tampa's ability to scout and develop talent. However, you won't recognize many names on that list. If you do, it's most likely in the context of remembering guys who never were or who almost made it. I'm not sure if David Bush is the current Brewer, but if it is he's the biggest name on the list. Jon Switzer, Tampa's second rounder that year, appeared in a total of 7 games for the D-Rays between 2003 and 2005. He currently pitches for AAA Buffalo in the Mets' farm system. 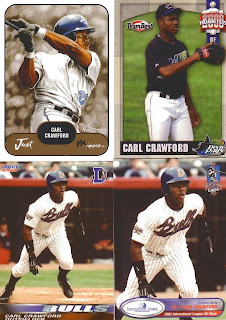 Finally, of the eight cards here, three of them (the two top cards at right and the 2000 Just above) mention the fact that Carl shares the outfield with Tampa's 1999 first round selection, Josh Hamilton. I guess this isn't too odd and reflects the excitement that surrounded "the natural" even them, but I haven't seen a Hamilton card that returns the favor, so to speak. Moreover, these mentions are more than a little backhanded. The 2000 Best (at far right) says that "Playing next to Josh Hamilton in the Princeton outfield, Crawford made a a name for himself by hitting .319 and could be playing next to Hamilton in Tampa Bay in a few years." Although the card says Crawford "made a name for himself," we must recognize that he did so in relation to Hamilton. Hamilton, it is assumed, will be in Tampa shortly and Crawford "could be playing next to [him]" again one day. Crawford isn't presented to us as "Carl Crawford" but as "the guy playing next to Hamilton."
The 2002 Just Minors (top left) says that Carl "Grew out of Josh Hamilton's shadow in 2001 with a banner season." This despite the fact that, in 2000, Best said he had already "made a name for himself." I think it's safe to say that "no, he hadn't," and it would be several years before people stopped seeing Crawford in relation to Hamilton, sadly due to Hamilton's career being derailed by drug use more than to Crawford's accomplishments, which were many.
I feel like we see this shift in the final two cards, both depicting Crawford with the Durham Bulls. These are from 2002 and show Crawford coming into his own. Since they sport the same photo, they also offer an interesting study in how editing radically alters our reception of a photo, but that's another post. These cards both have a dynamism that the top two Riverdogs cards lack. Following his eyes we know the ball is in play somewhere on the right side of the field. Crawford explodes out of the batter's box (home plate and the knob of the bat are visible in the card on the left) and, although we still note a degree of uncertainty in his eyes, we also find a confidence not present in the other cards. You can barely make out the first tats on his right arm and he's sporting old-school high socks. Crawford is settling into the game, he's making his own name.
I also have a Just minors auto and just won two more Crawford minors cards (both Just) that I might post later. If anyone knows of any others (especially of Crawford playing for Orlando or Princeton) I'd love to know about them. Peace!
Posted by Carl Crawford Cards at 9:59 AM