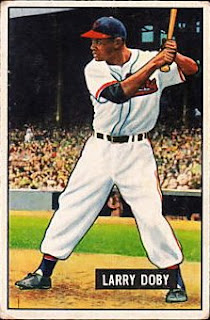 Last night I was watching MLB Network and an advertisement for the Civil Rights Game next Saturday came on. What I really liked about the commercial is that, after the opening sequence with Jackie Robinson, it then showed Larry Doby.
If you don't know who Larry Doby is, he was the first African American to play in the American League, joining the Cleveland Indians eleven weeks after Robinson took the field for the Dodgers. He passed away 6 years ago this past week on June 13, 2003.
He was also from Camden, SC, my home state. My dad made sure I knew who Doby was growing up, but no one made a particularly big deal about him. There were no Little League parks, no public appearances, no one mentioned him in the class on SC history, nothing.
Fortunately, many things have changed since then. Not everything, but many things. Doby's number 14 was retired by Charleston's Minor League club, the Riverdogs. Last year they even had a Negro League Day where they gave away Doby replica jerseys (Newark Eagles) and invited two Negro Leaguers to come to the park.
This week I'll be blogging about Doby and what I learned at that game talking to the Negro Leaguers and other folks I met there. Dinged Corners did an incredible post a while back on non-MLB traditions (can't find the link..grrr!) and that also inspires this week.
Tomorrow: The Cannon Street All-Stars
Posted by Carl Crawford Cards at 9:23 AM