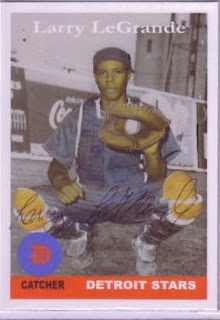 Although Robinson and Doby broke the color barrier in 1947, it would be another 12 years before Pumpsie Green took the field for the Boston Red Sox. Needless to say, integration was a process that took years to accomplish and many Negro Leaguers were never given a legitimate shot at the playing in the Majors. Today, many of them don't even qualify for MLB pensions, and yet they still travel the country promoting the game they played and love.
So, at the same game I got to meet Clifford Layton and Larry LeGrande, both of whom were there signing autographs and selling Negro League memorabilia. I waited until things dies down a bit and struck up conversations with both of them. I am a sucker in general for talking to ex-ballplayers (not something one get to do too often) and have to say that talking to these two men was awesome. When impressed me about Layton was his encyclopedic knowledge of the Negro Leagues' history and his enthusiasm for sharing stories from his playing days. I don't remember much about talking to LeGrande because the first thing he lead with was "I caught Satchel Paige." After that I was pretty much in a haze, I mean, I had just shaken hands with a man who had caught Satchel Paige!
If you see that your local ballpark is sponsoring a Negro League night, I can only say "GO!" Talking with those two men was awesome and something I'll never forget. I saw that the Durham Bulls are having a Negro League night this Saturday, June 20th, and wish I could be there.
Posted by Carl Crawford Cards at 9:58 AM